When the plant manager arrived at our Colorado office on Monday, July 17, he found the front doors smashed. Assuming there had been a break-in, he called the police. After the police arrived, he checked the security camera footage and saw that the vandal was actually a goat.

The video has since gone viral, and been posted and viewed all over the world. News organizations worldwide contacted us to use and share the video.

Many of the viewers assumed that the goat had seen his reflection and thought it was another goat, but an article that National Geographic wrote quoted a sheep and goat specialist who said that the goat likely just did it for fun.

The goat’s owner has been found and has been in contact with us to repair the doors. 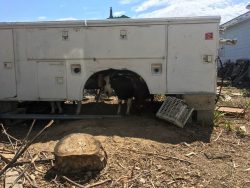